It has been developed within the InnovaConcrete project led at the IETCC, with development by TECHEDGE ESPAÑA. (Click on the image)

A small historical tour of the construction of the headquarters of our Institute: the Edificio Costillares.

The current IETcc headquarters was designed in 1951 with an unusual floor plan: a letter π. The complex stood out for many technical and aesthetic innovations, including this curious floor plan. The choice of the letter pi to organize the main building, or the use of a Platonic solid like the dodecahedron that forms the coal silo, have been interpreted from an esoteric point of view. While we cannot provide documented justification for them, these solutions possibly have more to do with Mr. Eduardo Torroja’s own interest in mathematics and geometry. It should be remembered that his father, Eduardo Torroja y Caballé, was an important mathematician and geometrician.

The building is a project by the architects Manuel Barbero and Gonzalo Echegaray, carried out under the direction and supervision of Eduardo Torroja, civil engineer and director of the Institute.

The property known as “El Bosque” in Chamartín-Costillares was chosen as the location for the new headquarters, which offered a privileged situation within the incipient urban development of the area. The characteristics of the site, located among pine trees, with a rough surface and a strong slope towards the west, were especially taken into account when defining the project solution.

The programme of needs involved a complex scenario. Due to the type of work to be carried out at the Institute, both theoretical and experimental, it was necessary to propose different types of space with characteristics suited to each of the uses. In addition, the building had to be versatile enough to incorporate activities not foreseen at the time, arising from the advances in research.

With these conditioning factors, the project was formalised into a set of volumes, each one of them responding to maximum functional efficiency, articulated among themselves and carefully adapted to the surroundings, delimiting and incorporating the place as a necessary participant in the composition.

The complex has a main building, with a floor plan in the form of a letter pi that houses the representative area, theoretical studies, laboratories, workshops and general services. In addition, an exempt building where a pilot plant for the manufacture of cements is established, as well as facilities for tests on a semi-industrial scale. In 1967, as an independent body but connected to the main building, a new building was added for carrying out large-scale tests.

In the construction of the Institute, a commitment was made to modular repetition and standardisation of the greatest number of construction elements, which gives an idea of the modernity with which the project was conceived. In addition to considerably optimising resources, clear compositional resources were obtained through the prefabricated elements, which, as in the case of the window frames and the gargoyles, are identifiable with the building.

The organic configuration of the complex facilitates solutions of great landscape and sculptural value. Particularly noteworthy are the circular dining room, water tank, coal silo – docecahedron, roofs of warehouses and Accentos workshops, pergolas of the Costillas and Los Sietes. 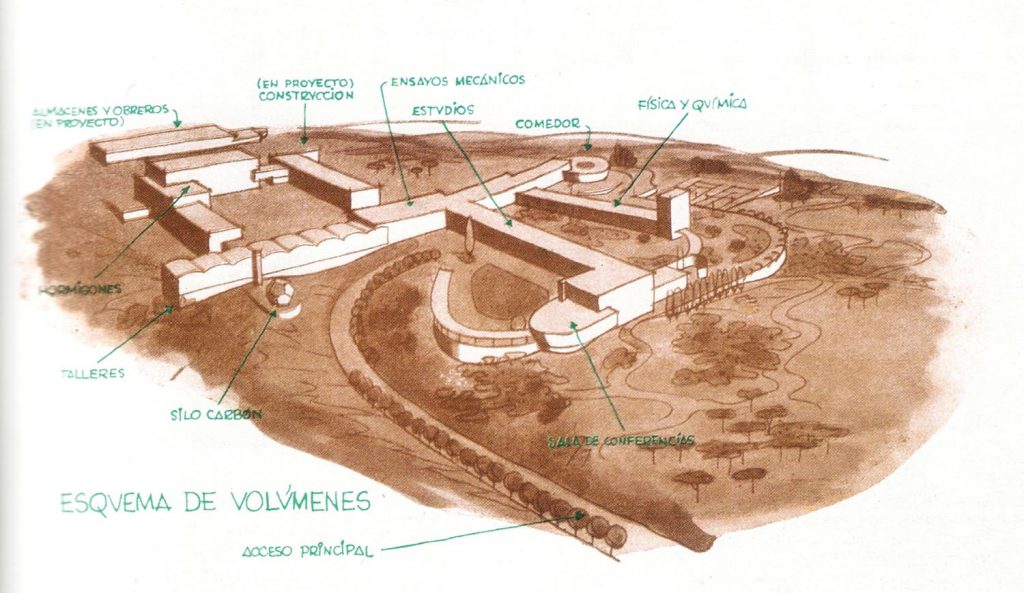 Diagram of the volumes of the complex (1950s)

Currently, at the Instituto de Ciencias de la Construcción ‘Eduardo Torroja’, of the ‘Consejo Superior de Investigaciones Científicas’ State Agency with research staff from different areas, it covers the spectrum from basic research to technology transfer. The core activity of the institute is research in the field of construction, carrying out innovative research in relation to the development of new materials, such as cements with a lower carbon footprint, in functionalized materials, in recycling valorization; we design concretes that until recently would have seemed like science fiction; we evaluate durability and propose solutions for the repair of structures; we research energy and acoustics applied to construction, in barriers for radioactive waste and radon or we seek answers to questions such as what is sufficiently safe? In addition, the IETcc evaluates innovative construction products and we are the technical arm of the Ministerio de Fomento for the elaboration of the Technical Building Code.

Since 1934, when a group of architects and engineers founded the Technical Institute of Construction and Building as a private entity, the staff of what would later become the Eduardo Torroja Institute has maintained its commitment to research, collaboration and promotion of innovation in the field of construction over the years. Care has also been taken to maintain a continuous relationship with business and sectorial organisations, as well as with successive Ministries related to public works, housing, industry and the environment, all from the CSIC, which the Institute joined in 1940.

The founding spirit responded, at that time in the 1930s, to the need for research into new types of construction based, in particular, on what was then a new material: reinforced and prestressed concrete. Multidisciplinary teamwork was infused as a basic operating principle, which was embodied in the motto Technicae plures, opera unica. This approach led to the convergence of different scientific and technical disciplines that continue to coexist at the institute today.